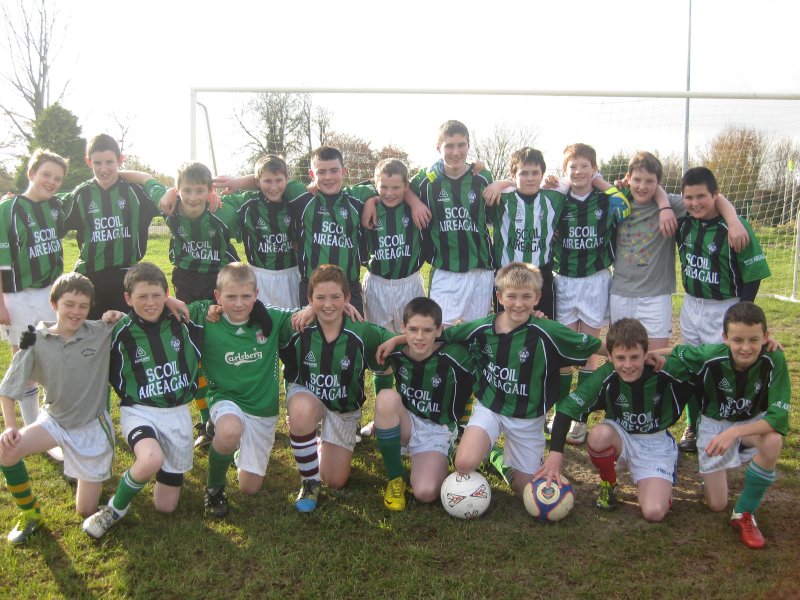 The team enjoyed a fantastic opening league game win against Mhuine Bheag of Bagenalstown in the Carlow/Kilkenny League. The team started brightly and two fantastic early saves from shots by Scoil Aireagail’s Conor Lawlor and Conor Doolan from the home Goalkeeper prevented the school from taking the lead. The home defence was finally beaten in the 15 minute when an inch perfect cross from martin Davis was headed home from close range by Jamie Dungan. The home team equalised soon after when the Scoil Aireagail defence failed to clear a corner kick enabling the ‘centre forward’ to score from close range.

The response from Scoil Aireagail was swift and a fantastic chip was excellently executed by Martin Davis from the edge of the 18 yard box to restore the away teams advantage. The second half saw both teams come close to scoring with some excellent forward play from Adam Brenner, Conor Lawlor and Jamie O Loughlin nearly adding to the Scoil Aireagail’s total. At the other end Roy Cullen was immense in hi s tackling and was well supported by Eoin Doolan, Brian Farrell and Brian Conway. In the end the score finished in a memorable 2-1 for the school and their next match is against Colaiste Pobal in December