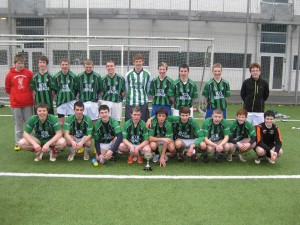 Scoil Aireagail settled well into the game after opting to play against the strong breeze in the 1st half. A pin point pass from Sullyman Masood enabled Ronan Coffey to run through on the Hackettstown goal, and with excellent accuracy he lopped the ball over the advancing goalkeeper after 5 minutes. This settled any early nerves and enabled us to gain an early foot-hold on the contest.

Aided by the elements, Hackettstown did threaten the Scoil Aireagail goal but good interventions by Eugene Alyward and Roan Corcoran meant that Aaron Doherty’s goal came under little threat.

Scoil Aireagail’s lead was doubled on 30 minutes when good inter play between Callan Byrne and Daryl Cass- Kennedy on the right wing allowed Callan the time, to perfectly execute a shot to the top right hand corner of the goal giving the Hackettstown net-minder no chance.

In the second half Scoil Aireagail tried to push on their 2-0 advantage as shots from Darren Audoire and Kevin Farrell kept the Carlow teams’ advances at bay.

Aaron Doherty was forced into a safe on the 15min and his resultant clearance fell to the feet of Ronan Coffey who calmly slotted the ball past the advancing keeper to put Scoil Aireagail firmly in control of the contest.

As the game fizzled to a conclusion Scoil Aireagail were awarded a penalty when Callan Byrne was struck off the ball and the resulting spot kick was converted by Ronan Coffey.

There was still time for a 5th goal for Scoil Aireagail when excellent work from the industrious Patrick Butler and Luke Donnelly set up Ronan Coffey who in turn off loaded to Kevin Farrell who fired the ball past the stranded Hackettstown goalkeeper.

The final whistle soon followed and Scoil Aireagail celebrated their first win in this competition.

View all posts by ballyhale →
U-19 Badminton
Senior Hurling