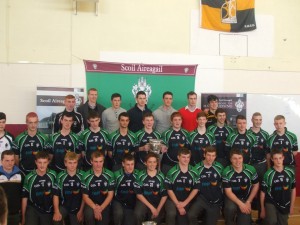 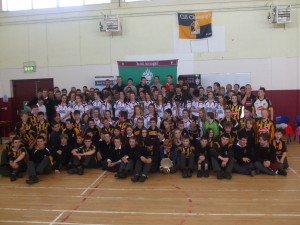 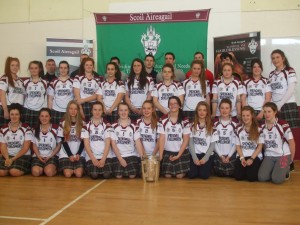 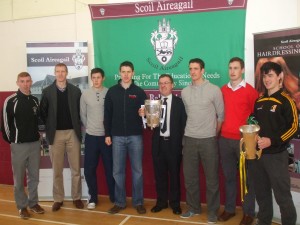 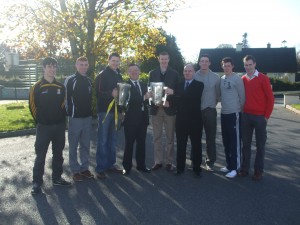 Members of the minor and senior all-Ireland winning hurling squads visited Scoil Aireagail on Wednesday 5 November to share their success with the students and the wider school community.

Past pupil Ronan Corcoran, who enjoyed a stellar campaign with the Kilkenny minors, displayed the Minor All-Ireland to the tremendous appreciation of his former schoolmates.

Senior players and past pupils Joseph Holden and Colin Fennelly did likewise with the Liam McCarthy Cup and were greeted with thunderous applause. Ballyhale maestros Henry Sheflin, TJ Reid and Richie Reid were also on hand to indicate the strength of the local connection with All-Ireland success.

Joseph Holden and Ronan Corcoran were presented with Scoil Aireagail jerseys as a memento of the contribution they made to Scoil Aireagail hurling success as students. The school has contributed significantly to the Kilkenny hurling cause. In the last twelve years alone students from Scoil Aireagail have won over 60 All-Ireland medals at various levels, including minor and senior All- Irelands and club All-Irelands.

No doubt they will have received further inspiration as a result of the visit of the all-Ireland winning players. Inspiration that will encourage them to emulate the achievements of the many past pupils who have graced so many hurling pitches with their skill, pride and commitment.