Congratulations to Scoil Aireagail TY students who have two teams through to the South East regional finals in the Helix Dublin on Tuesday March 3rd next.

Team 1: Costa Fortune is a beautiful dress made from used coffee cups and Costa pods designed to raise awareness of the amount of unrecyclable coffee cups used every year throughout the world. Model: Nadeen Drennan, and team members Chloe Phelan and Shane Aylward qualified during the first round of the regionals.
The second team qualified for the regional finals by popular vote, breaking records by managing to get over 12.5K votes and coming first in the country. Team members Joshua Burke, Donnchadh Walsh, Josh Dineen and Thomas Costigan. Modeled in photo by Joe Kearney. They created their design inspired by a character ‘Diamond Steve’ from the popular computer game Mindcraft.
Made out of used cardboard boxes and blue paper.
We wish both teams the best of luck in the finals in the Helix. Thanks to their teach Ms. Dalton for encouraging and supporting them. 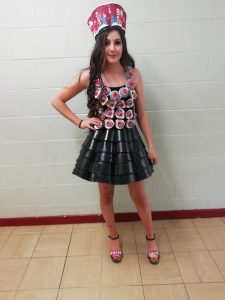 View all posts by ballyhale →
Wellbeing Week 2020
Board of Management