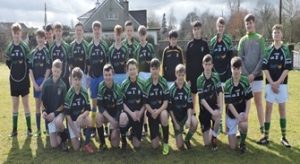 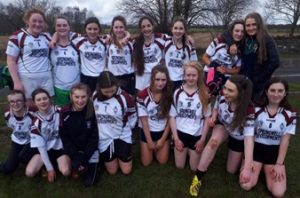 The junior soccer boys and girls teams were in action against KCVS on Tuesday 13th of March. The girls game was a tight affair with defenses on
top throughout. The game finished scoreless but we can be very happy with our performance and were definitely unlucky not to have scored on a number of occasions. Best for Scoil Aireagail were Shannon Wall, Nicole O Leary, Erin Slattery, Katie Doyle and Hannah Persse who was outstanding.
The boys game finished 2-2 after a fantastic game.  The game exploded into life in the second half when two quick goals from KCVS seemed to have tilted the tie in their favour. Scoil Aireagail fought back bravely however and a headed goal from Jason Delaney was followed up by a fantastic Mikolay Gorecki equaliser. Best players on the day were James O’ Keefe, Shane Aylward, Joshua Burke, Eoin Butler and Donnchadh Walsh.
Thanks to all the Transition Years who helped out preparing the pitches and to all players for great performances. Thanks also to soccer coach Mr. Walsh for preparing the teams and organizing the event.