By ballyhale on November 5, 2021 in News
Senior Hurling Round 1 Game 03/11/2021 v CBS New Ross.
FT Score Scoil Aireagail/Grennan College 5-13 CBS New Ross 2-12.
At Senior level we have joined forces with near neighbours Grennan College, Thomastown. As a result we have moved up three grades to C level, meaning we are now playing at a very competitive level.
New Ross had the wind in the first half and started brightly, however our lads stuck to their task and went in a point ahead at half time. Aided by the wind in the second half, we kicked on with some great performances.
A very entertaining game, and great to get a win under our belts. Our 2nd round game is in a weeks time against Colaiste Eamann Ris, Callan.
Thanks to managers Mr. Kevin Walsh and Mr. Murphy. 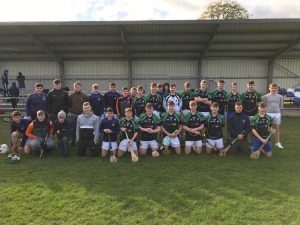