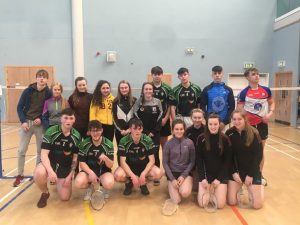 The under 19 Badminton teams were in action on the 16th January taking part in the Co. Kilkenny championships in the Watershed. We had two girls’ teams and two boys’ teams in all competing in two different divisions. Plenty of silver ware was taken home on the day, with one of our girl’s teams winning the division C competition beating Presentation C and Grennan College. The girls B team also played in this division and beat Grennan and narrowly lost to Presentation Kilkenny C on points difference.

The boy’s ‘B’ team played well in the group stages beating Grennan C and made it to the semifinals where they lost out to Kilkenny College. Our ‘A’ boys’ team had a hard-fought contest in the semi-final drawing with Grennan of Thomastown and winning in a sudden death game of doubles as both teams were drawn on games and score difference! Thankfully our boys came out on top and made it to the final where they took on Coláiste Mhuire of Johnstown. Again, the boys fought hard and this match resulted in a draw. The deciding factor was yet again to be score difference to which the Scoil Aireagail boys narrowly lost on a difference of aces. However, with silver medals in their the pockets the boys left happy! 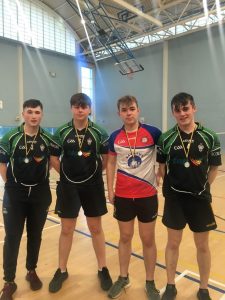 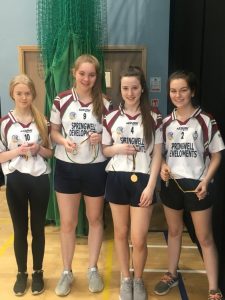